Bye Bye Thailand, I have left a piece of my heart there. I just came home two days ago, and reality has gotten the best of me. I’m already missing it soo much there. I’ve learned so much in the culinary academy, the past month was even more special because of the connection between the students and our teacher Juliana. We’ve become so close it felt like being sisters. I think also because it was a smaller group than our first month’s: it was just three students (including me) and one teacher, Juliana. each one of us represented a different part of the world, Italy, Brazil, Colombia, Singapore, but all tied together by the love of food & health.
The whole two months passed by so quickly but it was enough to get used to the routine, the resort in which the academy is is great, spread out on a big property, you are immersed by exotic plants everywhere, and there is a sense of peace and happiness surrounding the area. What made the experience so great I think most of all was passing your day with people who have same passions as yours, enjoying the conversations, talking the “same” language.
I’ve made some great friendships over there, from my Thai friend Bestie which I consider as my foreign sister and a great adventure/travelling companion to my colombian teacher Juliana who, who knows, one day we will start a business together 😉

Anyways, back to reality in Italy, in this month I will finish my application to University of gastronomic sciences in Bra, Italy, and hopefully be accepted, and prepare my self to leave for an internship this summer at Matthew Kenney’s restaurant in Venice Beach, Ca, which is called Plant food + wine. I want to keep my options open, so going back to Uni is still a possibility but not a certainty, if I find myself in love with working in a kitchen then I’ll probably keep doing that. But what I am certain of is that I want to work with FOOD, either as a chef, manager of some kind, have my own business, seller, or whatever but it has to involve food, especially plant-based.

The last week of Level 2 was all about preparing for our final project: create our own product (or more than one), come up with brand & product names, labels, packaging, recipe testing of course, and everything about costing and prices.
I made two types of granola, called “Superfood Fruity” and “Superfood Choco”, into two sized packaging (a one serving and 3 serving). the name of the product was Amber’s Crunch.
I also made Yogurt. I have cravings for yogurt and that is one of the things I have most difficulty avoiding being on a plant-based diet, so the idea of making vegan yogurt has always come up to me. I’ve tried different brands in the Us but never was that enthusiastic. In the first month one of the recipe was coconut yogurt, using coconut meat, and it comes out really good and creamy/fatty because of the coconut. But I wanted to make a yogurt with a good alternative of plant-based protein ( nuts or seeds) and with ingredients more easily sourced. So the whole week I tried so many varieties, mixing nuts, fermenting less or more, using other liquids etc. Two were the final bests, even though I think if I had worked on it for longer I would have reached an even better combination: the one that I decided to sell was made of Almonds and a smaller percentage (25%) of Pine nuts, the second one which I liked more for its creaminess and appearance (whiter, just like real yogurt) was made of macadamias and coconut meat. Even though I liked the macadamia/coconut one better, it didn’t respond to my wish of making a protein rich yogurt (still is full of good fats which is good too) and if I wanted to sell in Italy for example it would end up costing very much and be anti-ecological because of the hard to find ingredients.
I then created three flavors: Plain, Berry (mix of blueberry and strawberry) and Tropical (mix of mango and papaya).

Making the labels was really fun, I downloaded Photoshop for a free month trial and quickly learned the basics. I came up with my brand name: “Green Eats” and called my products Amber’s Crunch for my granola and Alm-Yo for my (almond) yogurt. 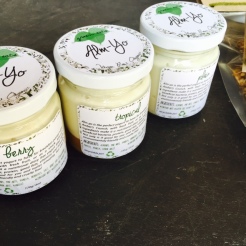 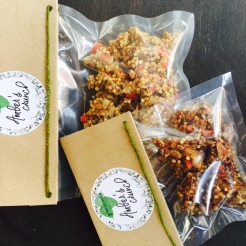 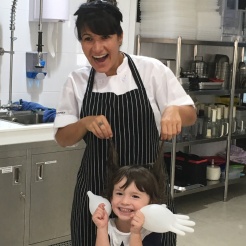 one of the student’s kid 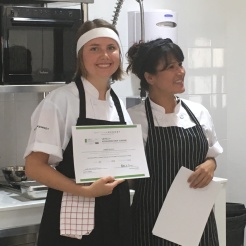 At the end of week three was Earth day. One of our instructors is very into sustainability-waste food management and has done,throughout the years, a couple of pop up dinners using scraps of food from the week from restaurants or farmers or supermarkets. So for earth day she organized another one of these dinners, a five plus coarse meal, for about 15 guests, plant-based of course. Who ever wanted of the students could help out, of course practically every one showed up. It was so fun. She had come up with the entire menu and organized very well. Some examples of using scraps are: we made a slider veggie burger and a beet ketchup using scraps of beets from beet ravioli. For the consomme instead we used pineapple cores. For the main dish we used broccoli stems that would usually be thrown away. You try to use everything from scraps but obviously you use general things like seasonings etc. 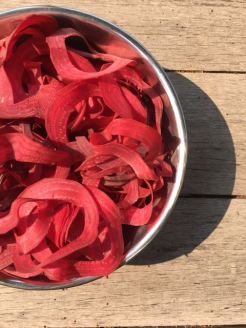 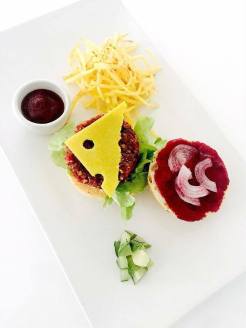 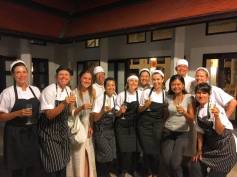 Finally some pics from the last two weeks and my final days in Bangkok, very hot Bangkok, before leaving for Italy. 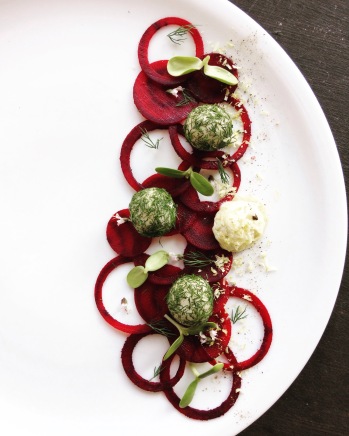 one of my cheeses for cheese presentation 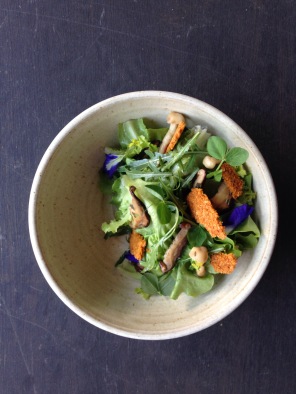 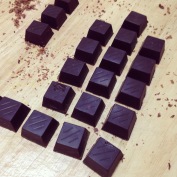 wine tasting day!! with our amuse bouche for each wine 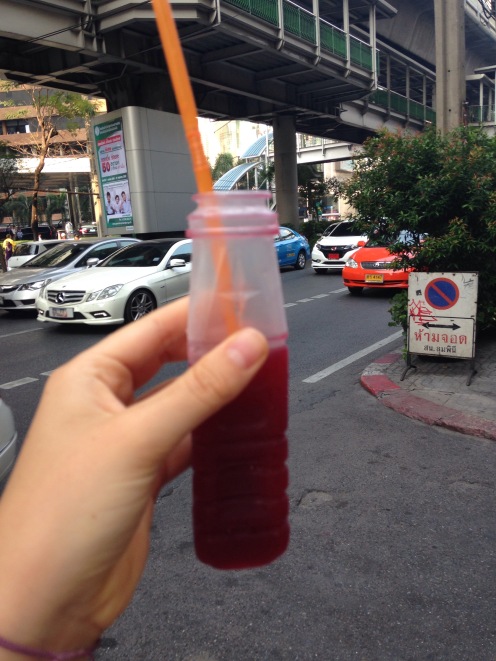